About the San Diego County Area

There is absolutely no finer place in the entire country to live than San Diego.  We have the perfect [ by all standards] Mediterranean Climate.  There are only five other places in the world that have similar climates, as follows:  the Mediterranean [of course], western Australia-Perth, Central Coast of Chile, South Africa & Sounthern California. 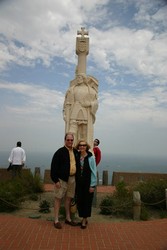 All of San Diego County was left undeveloped until the 20th Century.  The growth in the region was sporadic until the post WWII years.  You see, all the sailors who fought in the Pacific were sent thru basic training in San Diego.  When the war was over, they remembered the climate and moved here to start life anew. 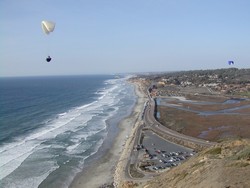 Del Mar is one of the original small communities on the North Coast of San Diego County. 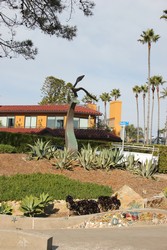 Solana Beach CA 92075 is a small town [two square miles] located in the north coastal area of San Diego County.   It was originally developed in the 1920's by the famous Col. Ed Fletcher of Rancho Santa Fe.  It incorporated as a town in 1986.  I have lived in Solana Beach for most of my life, FYI.

Rancho Santa Fe was originally on of the many Spanish Land Grant Ranchos in San Diego County.  It was purchased by the Santa Fe Railroad company and planted with Eucalyptus trees, the thinking being that the wood could be used for rail road ties.  Unfortunately, no one had bothered to notice that these trees grow in a twisted form and can NOT be split into rail road ties.  That was good news because it left the beautiful Eucalyptus trees in tact, until they were attacked by an Australian microscopic wasp in the late 20th century.

Cardiff, Encinitas & Leucadia are small towns in the North Coastal Area of San Diego County.  The towns were settled along the coast by predominately English/Scottish & Welsh because the land was advertized in those places.  Accordingly, the inland areas of this area were settled by Germans who came here to farm.

San Dieguito is the name [meaning little San Diego in Spanish] for the area located on the North Coastal Area of San Diego County.  It is comprised of the small towns of Del Mar, Solana Beach, Cardiff, Encinitas, Leucadia & Rancho Santa Fe.